Submit your email to receive our communications!

About a third of financial advisor client assets were invested in mutual funds last year, but advisors are increasingly veering toward ETF’s and separately managed accounts — and the trend looks poised to continue, according to new research. Yet some FAs warn that completely foregoing mutual funds could hamstring an advisor’s ability to adequately service their clients’ investment needs.

According to Cerulli Associates, mutual funds are estimated to decrease in use by 4% in 2020 to just short of 30%. ETFs and separately managed accounts, however, are forecast to increase by about 4% and 2%, respectively, the research firm claims.

“As investors have become increasingly cost-conscious, advisors take on fiduciary responsibility, [advisory] business shifts away from commission-based to fee-based models, [and advisors] move towards a unified advisory platform where they have more vehicles available to them, [advisors] are increasingly returning to wrappers like ETFs” and separately managed accounts in general,” says Brendan Powers, associate director of product development for Cerulli Associates. 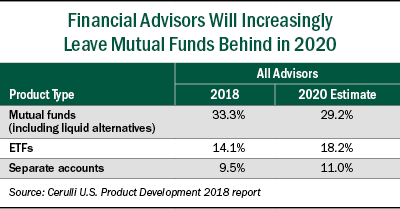 Mutual funds are generally more expensive than ETFs because of the fees attached to the instruments, explains Powers — particularly 12b-1 fees which are paid out of fund assets to cover distribution and shareholder service expenses. He says this is one reason mutual funds are losing popularity among advisors: they’re simply more expensive.

Edelman Financial Engines was an early leader in the trend away from mutual funds, says Ric Edelman, founder and executive chairman of the $212 billion AUM RIA.

“We’ve been using ETFs for 15 years and were one of the first advisory firms in the country to adopt widespread use of ETFs in our financial planning practice,” Edelman says.

ETFs are “far less expensive than mutual funds because of the technological and regulatory structure they enjoy,” Edelman says. And as a result, “ETFs pass the savings on to the investor, dramatically lowering their expenses” versus mutual funds.

The industry has “been seeing [a movement from mutual funds to ETFs and separately managed accounts] for several years within equities. It’s not a secret that the average active mutual fund manager has struggled during the equity bull market of the last decade. [But] we are not anti-mutual fund,” Haarstick insists. “I’d guess the majority of investors still conflate ETF with passive management, or an index approach, and mutual funds with an active approach. The reality is that both ETFs and mutual funds are simply wrappers and could provide value to their owners using a variety of methods,” he says. 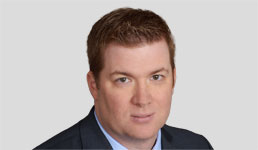 “Open-ended mutual funds have advantages in terms of simplicity of trading,” he says. “With a mutual fund, trading is very simple. We put in a buy order or a sell order, and it is executed at the end-of-day price. [But] with an ETF, we can trade it one or both of two ways. First, we can go into the open market and trade it as we would a stock. This is fine when we are placing small orders, perhaps for one client, or we are a small financial planning firm not trading large volumes. But for a larger firm like us, we typically have to utilize block trades to buy or sell an ETF.”

And trading large blocks of any stock can dramatically move the price beyond what a trader had budgeted, Feldmann explains.

“We buy or sell the ETF in our firm’s account with the custodian. That trade is then apportioned out to clients, some whom we are buying the ETF for, others whom we are selling it for. We need to provide an allocation file to our custodians each day not later than one hour after market close. If our allocation does not exactly match the trade, that is a problem,” Feldmann says.

Trading ETFs can be tricky

Placing the ETF trade is a multifaceted process, Feldmann explains.

“To place the trade itself, we typically have to call the trading desk of the custodian. They in turn go out and accumulate bids or offers for the buy or sell. For us, we utilize two custodians, which requires time and effort to telephone each of them. This takes more time and resources for us than simply placing mutual fund trades.” 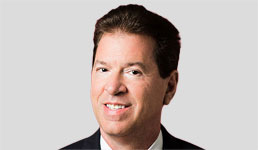 The “flash crash situation you have during the trading day [also] doesn’t affect the open-end mutual funds because they are priced at the end of the day,” Feldmann adds.

When it comes to investing itself, “certain strategies are [additionally] available in an open-ended mutual fund format and not an ETF.” Investments in the “deep value” and “relative value” spaces within value equity investments, as well as some fixed income investments, are examples, Feldmann says.

“The deep value [investing] style is an active style that may involve purchasing risky securities of bankrupt or nearly bankrupt companies. This may or may not be a style conducive to indexing or the ETF structure. Similarly, the relative value style — which sometimes involves purchasing securities that have gone out of favor due to, perhaps, poor media stories — may or may not function quite as well within the ETF space.”

Despite pointing to the positives of mutual funds, Feldmann nonetheless acknowledges ETFs are gaining ground in popularity.

“There has definitely been a huge shift towards ETFs,” he says. “It’s easy to talk about the positives of ETFs, because they are huge.”

“Mutual funds are typically less tax efficient and offer less flexibility. ETFs from firms like Vanguard offer the best of everything because the ETFs are just slices of their mutual funds,” Lockshin says.

Edelman agrees with the prediction that advisors will increasingly shift to using ETFs.

“The mutual fund industry is a dinosaur. And although the majority of assets are in mutual funds [now], that’s largely due to inertia. Most mutual fund companies are in net outflows. The flows are all steering towards ETFs,” Edelman says.

Our site uses cookies to give you the best user experience. By continuing to use the site you are agreeing to our cookies policy.Ok